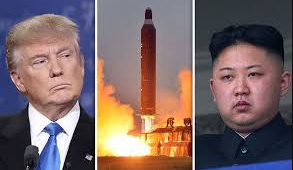 The United States Government has ordered that all US passport holders should leave North Korea by September 1, 2017.

Also, Americans who want to travel to North Korea will have to obtain special validation from now on. US authorities said that the validation will only be granted in "limited circumstances".

Ever since Donald Trump became president, US relations with North Korea have deteriorated and tensions between both countries have been growing, with the US recently testing its ballistic missile intercept system in Alaska.


North Korea's president also threatened that he could strike the entire continental U.S. after test-firing the regime’s second intercontinental ballistic missile within a month.

Kim Jong-un warned the US it would not be safe from destruction if it tries to attack.

Senator Lindsey Graham said Donald Trump has told him there will be a war with North Korea if the secretive nation does not end its missile programme.

"He has told me that. I believe him," Senator Lindsey Graham told TODAY
12:59:00
street ajebo
gist