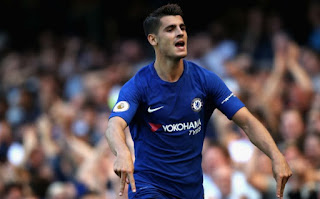 Chelsea beat Everton 2-0 at the stamford bridge with Spaniards Cesc Fabregas and Alvaro Morata on the scoresheet to give Antonio Conte a well deserved win on Suday afternoon.

Chelsea performed with the authority of Premier League champions as first-half goals from Cesc Fabregas and Alvaro Morata earned an accomplished 2-0 win over Everton at Stamford Bridge.


Antonio Conte’s side suffered a shock 3-2 defeat to Burnley at home on the opening day of the season and their victory over Tottenham at Wembley last time out owed much to doggedness and some timely slices of luck.

But the Blues preyed mercilessly upon an Everton side who showed signs of the toll trips to Manchester City and Hajduk Split this week had taken.

Fabregas was one of the villains against Burnley as he was sent off, but orchestrated his opening goal before the half hour.

There were suspicions of offside when Morata doubled the lead five minutes before the interval, but the flag stayed down and Everton’s hopes were seldom raised thereafter.

Conte’s immediate concern will now be looking for an end to the Diego Costa saga before the transfer window closes next week, while Chelsea travel to Leicester City after the international break.