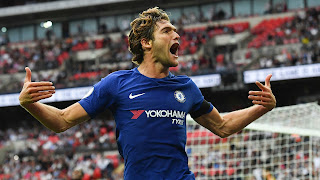 A spirited Chelsea outclassed Tottenham Hotspurs to a 2-1 victory at the wembley stadium on Sunday as Marco Alonso put in a Man-of-the-match performance with 2 goals.

Chelsea got their Premier League title defence up and running amid late drama as Marcos Alonso proved to be an unlikely two-goal hero in the 2-1 win over Tottenham at Wembley.


Last weekend’s shock opening-day loss at home to Burnley – a match where captain Gary Cahill and Cesc Fabregas were sent off – and the ongoing saga over Diego Costa’s future has cast an unwelcome shadow over Stamford Bridge and sounded unwelcome echoes of the last campaign they entered as champions.

Jose Mourinho paid with his job before Christmas in 2015 as a squad in turmoil hovered improbably over the relegation zone but Antonio Conte’s side allayed doubts over a similar implosion as they turned in a performance of grit and togetherness at the national stadium.

Alonso produced the champagne moment in the 24th minute and a remodelled defence, featuring Andreas Christensen on his first Premier League start, repelled waves of Tottenham attacks with increasing ease until a striker undid their good work.

Michy Batshuayi scored decisively when Chelsea clinched the title at West Brom in May but the Belgium international headed into his own net in the 82nd minute – three minutes after coming on.

It left Alonso to step up thrillingly once more. The wing-back stormed into the Spurs box to catch out Hugo Lloris at the near post two minutes from time, leaving Conte to unfurl trademark touchline delirium.