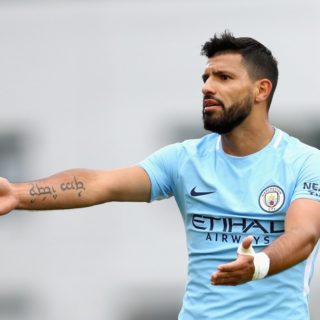 Sergio Aguero and a Lewis Dunk own-goal sent Brighton to a 2-0 defeat to Manchester City on their Premier League bow.

The top-flight class of Manchester City and Sergio Aguero eventually told as Brighton and Hove Albion’s Premier League bow ended in a 2-0 defeat.

Chris Hughton’s men held firm in the face of near incessant attacking from the pre-season title favourites, but a late strike from Aguero and Lewis Dunk’s own-goal sealed victory for City.


Pep Guardiola paired Gabriel Jesus and Aguero in attack, with new arrivals Kyle Walker and Danilo providing support from the flanks in a 3-5-2 system.

City dominated possession and territory, but the extra defender perhaps took something out of their attack and Mat Ryan’s stunning save from the Brazilian was City’s sole clear-cut opportunity of a goalless first half.

Jesus also saw two goals disallowed as wave after wave of City attacks broke up on Brighton’s back line, until Dale Stephens’ error opened up space for a merciless counter-attack and City’s opening goal and Dunk’s unfortunate intervention settled the match as a contest.