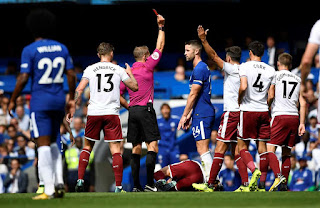 No club does meltdowns quite like Chelsea and, for 45 minutes, they looked ready to provide one of their best yet.

Make no mistake, the Blues were embarrassed by a Burnley team tipped to be fighting relegation in the first half of what proved to be a chaotic start to the season.


But despite finishing their first game with nine men and becoming the first reigning Premier League champions to concede three goals in the opening match of their title defence, Chelsea almost produced a miracle recovery.

Goals from record signing Alvaro Morata and David Luiz gave Burnley an almighty scare, but the damage had been done for Chelsea who will now be without captain Gary Cahill and Cesc Fabregas for next week’s trip to Tottenham Hotspur.

Chelsea have had players sent off against Arsenal in the FA Cup final and Community Shield, and against Burnley, and manager Antonio Conte said:

“You can see in the last three games we finished twice with 10 men against Arsenal and now with nine men.