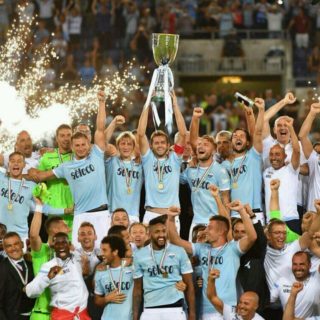 Juventus lost the Supercoppa Italiana for the third time in four seasons as Alessandro Murgia gave Lazio a stoppage-time triumph.

Alessandro Murgia came off the bench to snatch Supercoppa Italiana glory as Lazio secured a breathless 3-2 win over Juventus amid remarkable late drama at the Stadio Olimpico.


The hosts, playing in the showpiece by virtue of their 2-0 loss to Juve in May’s Coppa Italia final, appeared to be cruising to victory by the same margin thanks to a double from Ciro Immobile.

The one-time Juventus youngster built upon 23 Serie A goals in his maiden season at Lazio by winning and converting a first-half penalty and expertly dispatching a header nine minutes after the interval.

Juventus offered little sign of mustering a response until Paulo Dybala scored a magnificent free-kick in the 85th minute and the Argentina forward converted from 12 yards in stoppage time after Adam Marusic felled Alex Sandro.