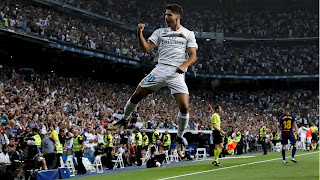 Real Madrid again defeated FC Barcelona 2-0 in the 2nd leg of the 2017 super cup, all thanks to Marco Asensio individual brilliance.

A listless first-half performance ended any hope of a Barcelona comeback in the Supercopa de Espana, the Catalans falling to a 2-0 second-leg defeat to lose 5-1 on aggregate against Real Madrid.

Marco Asensio wasted no time as he spectacularly fired the home side in front after four minutes on Wednesday, with Madrid dominating a team still adapting to life after Neymar.


Barca found goal-scoring opportunities hard to come by and Karim Benzema outwitted Samuel Umtiti to double Madrid’s lead on the night shortly before half-time at the Santiago Bernabeu.

The headlines after the first leg were dominated by Cristiano Ronaldo’s dramatic cameo, which culminated in a five-match ban following his petulant shove on the referee, but this was a thoroughly professional job from the European champions.

Barcelona improved after the interval – Lionel Messi and Luis Suarez both hit the woodwork – but their Neymar-less future remains a concerning work in progress for new boss Ernesto Valverde, as the club continue their pursuit of a suitable and – on this evidence – much-needed replacement. Those efforts may take on greater urgency after Suarez appeared to hobble through the closing stages.

With Ronaldo suspended and Gareth Bale and Isco on the bench, Lucas Vazquez and Asensio were selected to flank Benzema in attack, and the latter picked up where he left off at the end of Sunday’s first leg.

Having hammered home Madrid’s third from the edge of the box at Camp Nou, it took Asensio just four minutes to beat Marc-Andre ter Stegen from even further out in Madrid, firing in a wonderful 25-yard strike that left the German goalkeeper flat-footed.