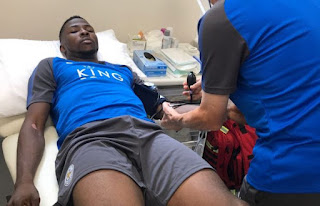 Kelechi Iheanacho’s move from Manchester City to Leicester City has drawn close, after he underwent a medical with the former Premier League champions on Tuesday.

The deal will cost the Foxes about £25million and will include a buy-back clause.


Iheanacho’s exit has been held up due to a row over image rights with his former agents.

Leicester have already agreed a fee and terms with City for the player, but have had to be patient during negotiations.

It is understood that Leicester have secured Iheanacho’s signature ahead of Tottenham Hotspur, West Ham United and Monaco.
21:14:00
street ajebo
gist, sports