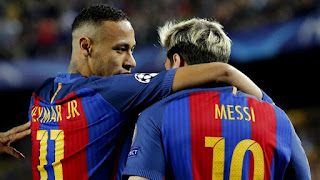 Lionel Messi has wished Neymar good luck in his new adventure as his Barcelona colleague closes in on a world-record move to Paris Saint-Germain.

Neymar’s proposed €222 million switch to the French capital swiftly gathered pace on Wednesday as he was granted permission to miss training and tie up his future.

“It was a great pleasure to have shared all these years with you, friend,” Messi posted alongside a photo montage of the pair.

“I wish you a lot of luck in this new stage of your life. See you, I love you a lot.”


Messi signed a new contract at Barcelona last month, reportedly worth €565,000 per week, tying him to Camp Nou until 2021. The five-time Ballon d’Or winner’s continued presence at Barca is rumoured to have been a factor in Neymar’s decision to leave, with his inner circle reportedly of the opinion that he will not be considered the best player in the world until he has the opportunity to step out of Messi’s shadow.

Neymar scored 105 goals in 186 games for Barcelona, with 20 of those strikes coming from Messi assists. He set up Messi on 22 occasions out of a total 59 assists.

Meanwhile, Neymar’s representative Wagner Ribeiro has confirmed that PSG will pay the player’s €222m release clause and expects a deal to be finalised this week.

As revealed by Goal on August 1, the Brazilian briefly arrived at training to say his goodbyes, with Barcelona later confirming that he had asked to leave the club.

The Catalan giants went on to state that they would not allow the 25-year-old forward to leave for less than his world-record buyout fee.

A statement released by the club read: “The player Neymar Jr, accompanied by his father and agent, has informed FC Barcelona this morning of his decision to leave the club in a meeting held at the club’s offices.


“Faced with this position, the club has informed them they refer to the buy-out clause of his existing contract which as of 1 July totals 222 million euros which will have to be deposited in its entirety.

“Furthermore, in reply to the claim for the contract extension bonus, the club has once again made it clear that the amount remains deposited with a notary until the case is resolved.

“The player remains under contract at FC Barcelona but with temporary permission to not take part in training sessions.”

And Ribeiro, a representative of the Brazil international, has now confirmed that the Paris club will pay the clause and that he will be presented as a PSG player this week.

Accompanying Neymar and the player’s father at the Barcelona El Prat airport, he told reporters: “PSG will pay the release clause and Neymar will be presented in Paris this week.”

Neymar will now travel to Paris in the coming days to finalise his world-record transfer to Unai Emery’s side.
22:02:00
street ajebo
gist, sports