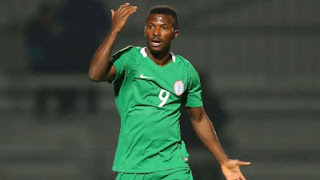 Nigerian striker, Olanrewaju Kayode, is set to complete a move from Austria Vienna to Manchester City.

Kayode finished as the top scorer in the Austrian Bundesliga last season with 17 goals from 33 appearances.


The 24-year-old is expected to sign a four-year deal with City, before being loaned out to Spanish side, Girona.

Olanrewaju Kayode, who has played for the Nigeria national team three times, can play wide as well as a central striker.

He will be the fifth City player to join La Liga side Girona this summer, after Douglas Luiz, Pablo Maffeo, Aleix Garcia and Marlos Moreno all signed season-long loan deals.

City are currently in Spain for a four-day training camp and will play a friendly against Girona on Tuesday night.
17:04:00
street ajebo
gist