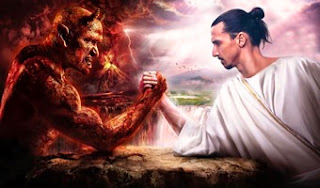 Manchester United have re-signed striker, Zlatan Ibrahimovic on a new one-year contract. Ibrahimovic was released at the end of last season following a major injury but is now back at Old Trafford for the 2017-18 campaign.

Ibrahimovic, who suffered a serious knee injury in the Europa League win over Anderlecht in April, got a lot of fans scared for him after doctors confirmed he will be out of football till 2018. But the tough footballer surprised everyone with his quick recovery and is expected to resume play sometime in October.

Man United Manager, Jose Mourinho told the club's official website: "We are delighted Zlatan is on the road to recovery and we are equally delighted to have his ambition and experience back with us.


"After his contribution last season he deserves our trust and we will be patient waiting for him to return. I have no doubt that he will be important in the second part of the season."

Ibrahimovic, who will wear the No. 10 shirt this season, said: "I am back to finish what I started. It was always mine and the club's intention for me to stay.

"I cannot wait to get back out on that Old Trafford pitch, but I also know that I have to take my time to make sure that I am ready. I have been working hard and will continue to do so to make sure I am in the best possible condition for my return to the pitch."
21:01:00
street ajebo
gist, sports