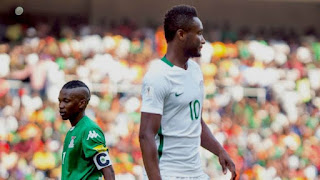 Super Eagles captain, Mikel Obi, has said the national team were in confident mood ahead of their crucial 2018 World Cup qualifier against Cameroon on Friday in Uyo.

The China-based midfielder, who is making a return to the squad, said he was back to guide the Eagles to next year’s World Cup in Russia.


“We are ready for (the game versus Cameroon), the team is a mix of young and experienced players,” the ex-Chelsea man said.

“I am here to make sure we qualify for the World Cup. Everybody dreams to go to the World Cup. We are playing at home, we are fit and we have what it takes to win the match.”

He maintained that the team had been working assiduously and was hopeful they would beat the Indomitable Lions.


In the same vein, Eagles coach Gernot Rohr has said the players would be more aggressive in their approach to the World Cup qualifier on Friday.

The German stated, “The list of players makes the difference, not so young, more of experienced players. We already have six points;and all players are in high spirits.

“We know that we have a good team, we are ready to make the difference and we are confident of beating the Indomitable Lions in Uyo.”

He appealed to fans to support the Eagles to win the first leg of the match, saying that a win would move the Eagles to do better in the return leg.
21:38:00
street ajebo
gist, sports