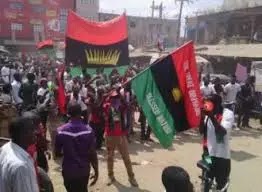 Twopersons were feared dead and scores  wounded, yesterday,  when supporters of the Indigenous People of Biafra (IPOB)  and  soldiers clashed in Oyigbo, capital of Oyigbo Local Government Area of Rivers State.

Daily Sun gathered that the clash started at the popular Oyigbo Express Junction, when IPOB members received information that some of members had been ambushed by soldiers and eight allegedly killed at 44 Battalion Asa, in  Abia State.

A source said the travelling IPOB members were said to have allegedly responded to a call from their second-in-command, Uche Mefor, who they claimed, called in from London. He reportedly ordered IPOB members to move down to Nnamdi Kanu’s residence in Umuahia, Abia state.


According to the source, in reaction to Mefor’s call,  IPOB members mobilised and started protesting, with some of them attacking people  they suspected were opposed to the  Biafra struggle.

It was alleged that some IPOB members  seized three rifles from policemen and burnt a police van at Oyigbo junction, and forced business and shop owners to lock up, as motorists and commuters scampered for safety.

A witness, who declined to be named for security reasons, recounted how “northern traders hurriedly closed their shops and ran for safety, with some of them running to Oyigbo Police Station.
08:59:00
StreetajeboStaff
gist