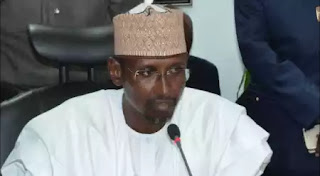 Minister of the Federal Capital Territory (FCT), Mr. Muhammad Bello, has given marching orders to security agencies in Abuja to be on the alert, following the military crackdown on members of the Indigenous People of Biafra (IPOB) in the Southeastern part of the country.

Bello who made this call after an emergency meeting of the FCT Security Committee on Saturday, said the alert has become necessary so as to guide against any breakdown of law and order in the territory.

The Minister said after the meeting: “The purpose of the meeting was to review the situation in the South East and its implication for the residents of the FCT as a Centre of Unity.


We are properly briefed, and the whole idea is to ensure that FCT remains as peaceful as it has always been.

We also used to occasion to receive update on the situation of law and order in all the Area Councils and satellite towns. From all the reports we received FCT is peaceful.

“It is very clear that from what we read from the social media and some other electronic media, there are some people out there who clearly want to create trouble in this country.

That is why I am calling on all residents to ignore any negative report they read on the social media platforms that tend towards disunity, disaffection and targeted clearly towards trying to create trouble.”

The Minister further stated: “In the FCT, all the ethnic groups, religions and creeds are fully represented and live harmoniously.

The laws of the land are very clear and anyone trying to foment trouble would be dealt with according to law. To this effect all the security agencies have been placed on heightened alert.”

Bello appealed to all FCT residents, especially those from the South East to live peacefully, to carry on with their lawful businesses without any fear and to discountenance the antics of some people out there who clearly want to create trouble.”


He stressed that “the administration will not shirk it responsibility for the protection of lives and property in the FCT” while enjoining all the traditional rulers and chairmen to cascade the outcome of the deliberations to the Area Councils and grassroots communities.

He also harped on the necessity for all residents to be alert to the happenings around the neighbourhood as security is a collective responsibility.

The new FCT Commissioner of Police, Malam Abubakar Sadiq Bello has also announced that security agencies have put in measures to collaborate and work together to ensure peace and order as well as the exchange of intelligence in the territory.

He said this had already with the show of force conducted on Friday.

Similarly, he disclosed that arrangements are in place for both visibility policing and intelligence gathering and sharing with other sister agencies.
08:51:00
StreetajeboStaff
gist