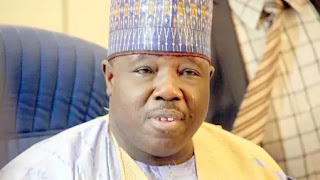 Chieftains of the All Progressives Congress (APC) in Borno State, have reacted to moves by former factional chairman of the Peoples Democratic Party, (PDP) Senator Ali Modu Sheriff, to join the ruling party.

Reports claimed the former Borno State Governor was being wooed to return to the APC.


But addressing newsmen in Abuja, Maina Bashir and Abdullahi Mala, chairman and secretary, respectively of the Borno APC Coalition, dismissed the speculations as unfounded.

Alhaji Bashir said the coalition with party members from the 27 local councils in the state, was not aware of any effort to encourage Sheriff to come back.

“The crux of the story is that some unknown and unidentified members of our great Party seek the return of Sheriff, who until recently was the factional chairman of the opposition Peoples Democratic Party (PDP).

“Firstly, we wish to state that we are not aware of any call or move by any person or group for the return of Sheriff to the APC.

As committed members and stakeholders of the APC in all the 27 Local Governments of Borno State, we would have been aware of any sincere move or effort for the return of Sheriff to our Party, which he defected from at its greatest moment of need – just before the 2015 general elections.

“Secondly, the Borno State chapter of the APC is currently at peace, with no crisis whatsoever.


This is because of the excellent leadership provided by the Governor of the State, His Excellency Kashim Shettima, which has allowed the party to bloom.

We are wary of anyone joining the party, who is likely change this situation for the worse.

“Thirdly, while we may have no objection to Sheriff or any other person for that matter joining our party, we wish to state clearly that every returnee or potential new member must join from his or her ward.

We do not want ‘Abuja politicians’ with no substance at home in our Party.

“Finally, if the speculation is true that Sheriff has indeed eaten the humble pie and with his tail between his legs, wants to return to the APC, he should go to his Ngala, his town and register with his ward chairman. If Sheriff does not have the details Ward Chairman, we will gladly supply him,” he stated.
09:20:00
StreetajeboStaff
gist