Home » gist » CATHOLIC PRIEST TELL PRESIDENT BUHARI - 'YOU SAID " I BELONG TO EVERYBODY" BUT THE REALITY ON GROUND IS CONTRARY.

CATHOLIC PRIEST TELL PRESIDENT BUHARI - 'YOU SAID " I BELONG TO EVERYBODY" BUT THE REALITY ON GROUND IS CONTRARY. 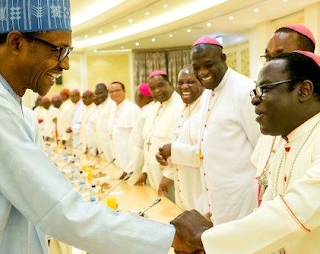 The Catholic Bishops’ Conference of Nigeria (CBCN) has released a statement in which they accused President Buhari of not keeping to the promise he made during his inauguration into office in 2015 that he belongs to everybody and to nobody in particular.

In the statement which was released today and signed by Ignatius Ayau Kaigama, president of the CBCN after a meeting in Taraba state, the clergymen said the inability of the federal government to address the inequitable situation in the country has resulted in a breeding ground for violent reactions, protests, and agitations.

“In his inaugural speech as civilian president of Nigeria on 29 May 2015, the president sent out a message of hope and of his commitment to national integration and cohesion.


Having just a few minutes ago sworn on the Holy Book, I intend to keep my oath and serve as President to all Nigerians. I belong to everybody and I belong to nobody. A few people have privately voiced fears that on coming back to office I shall go after them.

These fears are groundless. There will be no paying off old scores" President Buhari said in his inaugural speech
The clergymen, however, said his statement is currently not what is obtainable in the country.

"More than two years later, the reality on ground and the verdict of most of our people across the nation – irrespective of religious affiliation, ethnic group or social status – point to the contrary.

The inability of the government to address the inequitable situation in the country has provided breeding ground for violent reactions, protests and agitations, which exploit the grievances of different segments of the country.

We call on government at all levels to urgently address these anomalies, remove everything that smacks of injustice, and give everybody and every part of our country a sense of belonging.


We insist that merit and ability should be the primary criteria in making appointments and genuine needs the criteria for the distribution of amenities.

We also urge the government to be always sensitive to the multi-religious and multi-ethnic configuration of the nation. The nervousness among the populace with the potential of igniting a fire that could turn into an uncontrollable conflagration”.

The statement further read, “On the other hand, we enjoin all aggrieved persons and groups to employ peaceful means within the framework of the existing laws of the land to express their grievances or even exercise legitimate pressure on the Government.

Care must be taken by all to avoid actions and utterances capable of causing yet another armed conflict in the nation or any of its parts.”
15:56:00
StreetajeboStaff
gist