CHELSEA FORWARD EDEN HAZARD SHOCKS PSG, INSISTS HE WILL ONLY RETURN TO LILLE 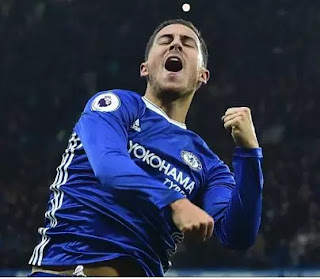 Chelsea forward Eden Hazard has dealt Paris Saint-Germain a major blow by insisting that he will only return to France to play for former club Lille.

Hazard has scored 72 goals in 251 appearances for Chelsea since his debut back in 2012 but the 26-year-old has been heavily linked with a move away from Stamford Bridge for two consecutive summers.


It’s understood both Real Madrid and PSG have expressed a strong interest in the Belgian but he appears to have ended the latter’s hopes of a deal.

‘There are some big clubs, and it was an attractive league [Ligue 1] even when I played in it six years ago,’ Hazard told French outlet SFR Sport.

‘Big stars want to play in Ligue 1, and that is a good thing.  But if I am to return, it will be to play for Lille – they are my club.


‘I still have a career to carve out, with a number of seasons ahead of me'.

star Thomas Meunier, though, believes his international team-mate would fit in well at the Parc des Princes. ‘Eden and Neymar are on the same level of ability,’ he stated earlier this week.

‘Neymar loves to have the ball at his feet, and to create situations on his own. Eden was like that when he first started out.
19:18:00
StreetajeboStaff
sports