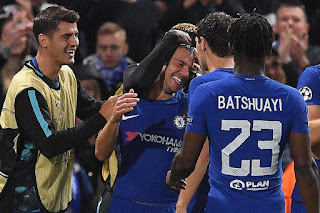 Chelsea demolished Visiting Qarabag 6-0 in the opening game of the Uefa Champions League 2017 Group C encounter at the Stamford Bridge on Tuesday night.

Antonio Conte's side took the lead in the game - Chelsea's first in this competition for 18 months - in just the fifth minute when Pedro sent a fine effort from outside the box into the back of the net.


Zappacosta then doubled the Blues' lead with a stunning goal on the half-hour mark on his first Chelsea start before Cesar Azpilicueta, Tiemoue Bakayoko and Michy Batshuayi rounded off the win with a further two goals, which will no doubt inject the Premier League champions with confidence ahead of their game with Arsenal on Sunday.

Conte had emphasised the need to rotate his squad for the visit of Qarabag due to the congested fixture list over the next 21 days while also saying he wouldn't take any "stupid" risks over Eden Hazard as he previewed the Champions League Group C clash from Cobham on Monday.

And, indeed, Conte proved true to his word after leaving the Belgian winger on the bench while making five changes to the starting line-up that secured a 2-1 win at Leicester on Saturday.

One of those was bringing in Willian back into the team, and the Brazilian proved crucial in creating Chelsea's opener in just the fifth minute after he sent the ball from the right to Pedro. 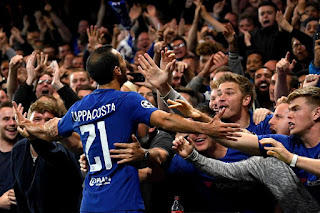 The goal came just moments after Andreas Christensen, another of Conte's changes, went tumbling down in the area but did not win a penalty yet Chelsea were soon 2-0 ahead through Zappacosta.

The Italian, who was making his first start since signing for Chelsea on transfer deadline day, won the ball on the right before racing down the flank and, after looking at his options in the middle of the box, crossing it.