Home » gist » HILLARY CLINTON REPLIES DONALD TRUMP - IF YOU DON'T LIKE MY NEW BOOK, READ THE ONE I WROTE FOR KIDS.

HILLARY CLINTON REPLIES DONALD TRUMP - IF YOU DON'T LIKE MY NEW BOOK, READ THE ONE I WROTE FOR KIDS. 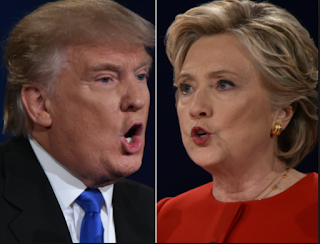 Yesterday, President Trump reacted to Hillary Clinton's newly published book 'What happened' where she explained why she lost the 2016 elections.


In his reaction, President Trump who won the election tweeted, 'Crooked Hillary Clinton blames everybody (and every thing) but herself for her election loss. She lost the debates and lost her direction'.

Now Hillary has replied him with another tweet where she said, 'If you didn't like that book, try this one some good lessons in here about working together to solve problems. Happy to send a copy'.

The book Hillary refers President Trump to read is titled 'it takes a Village' a book she wrote teaching young kids how to make the world a better place.
09:36:00
StreetajeboStaff
gist