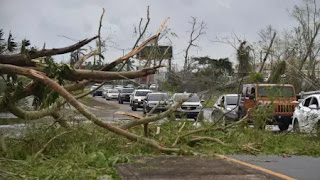 Puerto Rico braced for potentially calamitous flash flooding on Thursday after being pummeled by Hurricane Maria which devastated the island and knocked out the entire electricity grid.

The hurricane, which Puerto Rico Governor Ricardo Rossello called “the most devastating storm in a century,” had battered the island of 3.4 million people after roaring ashore early Wednesday with deadly winds and heavy rain. HECTOR RETAMAL / AFP

“So far, we would have buried in excess of 15 people,” he told a television network of Antigua and Barbuda, a neighboring country.

The island, which has some 72,000 inhabitants, was hit by the storm at the height of its Category Five power.

Dominica, which is located near the French islands of Martinique and Guadeloupe, has been almost completely cut off from the world.

Skerrit himself had to to be rescued during the hurricane, which blew the roof off his residence.