Home » gist » IN ZAMFARA STATE ONLY 23 DOCTORS ARE IN CHARGE OF 24 STATE HOSPITAL - ISAAC ADEWOLE.

IN ZAMFARA STATE ONLY 23 DOCTORS ARE IN CHARGE OF 24 STATE HOSPITAL - ISAAC ADEWOLE. 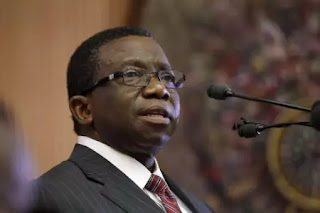 The Minister of Health, Prof. Isaac Adewole, has said that only 23 doctors are are managing and attending to patients in 24 state hospitals in Zamfara State.

Adewole made this known in Abuja on Tuesday, September 21, 2017, during the signing of a Memorandum of Understanding between the Sokoto State Government and the Federal Government-owned Usman Danfodiyo University Teaching Hospital, Sokoto.


He said: "I was in Zamfara. At the Federal Medical Centre in Zamfara, there are about 120 doctors but the state has less than 40 in the entire state, in fact they were 23 or so as at the last count to manage 24 hospitals.

“So, it is a matter of one doctor per hospital. And, yet, the federal hospital has about 120. To me, that is inequality, inequity and must not persist in our country.

This is because those who are not benefitting are also Nigerians. It is our duty to address these things and also ensure we offer our people good care.”
Adewole further noted that the shortage of doctors in Zamfara state hospital had been negatively affecting the health care delivery in the state.

The minister also urged state governments to enter into agreements with the Federal Government so that doctors working in federal establishments across the country could be deployed in state hospitals to assist.