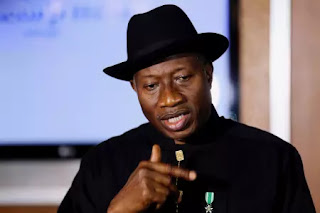 Former President Goodluck Jonathan has cautioned his successor, Muhammadu Buhari, against extending his military expedition to the South-South and South-West geopolitical zones.

In a statement yesterday by his aide, Reno Omokri, the erstwhile Nigerian leader faulted the military for labelling the Independent People of Biafra (IPOB) as a terror group, insisting that it lacks such right.

He stressed that since the country was under military rule, the armed forces ought to be separated from the police in a democratic setting. According to him, the soldiers were trained to contain external aggressions.


Slamming the Minister of Information, Lai Mohammed, for alleging that the activities of the agitators began after he lost the 2015 polls, Jonathan challenged him to identify, arrest and prosecute sponsors of the group.

His words: “We want to advise the Buhari administration, which has announced plans to extend the military show of force to the South-South South-West through Operation Crocodile Smile, to tread with caution.

“Nigeria is no longer under military rule. In a democracy, you separate the military from the police. The military is not meant to fight criminality within a nation because they are trained to fight a nation’s external enemies.

“It is the police that are trained to fight crime internally. When the military starts doing the job of the police and fighting what they call a ‘show of force’, the effect will not be to reduce crime. The effect will be to intimidate people.

“If the government in which Lai Mohammed serves knows which opposition members are sponsoring IPOB, then they should identify, arrest and prosecute them.”


He went on: “Ever since Lai Mohammed made his ill-advised statement, a principal member of the All Progressives Congress (APC) government and Senate President, Bukola Saraki, has come out to say that the actions in the Southeast are troubling and some of it are unconstitutional. Is he also sponsoring IPOB too?

“It is our suspicion that Lai Mohammed is talking from history as he criticised my government for banning Boko Haram in a statement he released on June 10, 2013, even though our administration had gone through due process before proscribing that murderous sect.”

Meanwhile, Governor Ayodele Fayose of Ekiti State has called on the United Nations to investigate the ongoing activities of the military in the South East, maintaining that no extant law empowers the exercise.