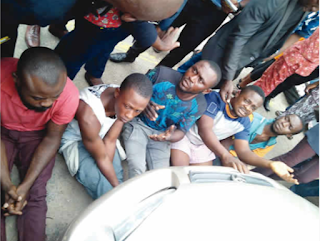 The Commissioner of Police in Lagos state, Imohimi Edgal, has announced the arrest of six persons in connection with the murder of Hector Jobarteh, the winner of the third edition, Guilder Ultimate Search, GUS.

The 38-year-old reality TV star was shot dead at his home in Oko-Oba on September 4th minutes after returning from the Murtala Muhammed International Airport, Ikeja where he had gone to pick up his younger brother.


Speaking at a press conference at the state police command headquarters in Ikeja yesterday, Imohimi gave the names of the suspected killers that have been arrested as Igana, 28; John, 26; Adekunle, 19; Madu, 24; Adeyemi, 20, and Adekunle, 25. He said the driver of the vehicle that transported the killers has also been arrested

"The driver that conveyed the killers of Hector and one of the killers have been arrested. The phone belonging to Hector, which was stolen from him after his murder, has been recovered. Five other suspects in connection with the case have also been arrested.”
09:44:00
StreetajeboStaff
gist