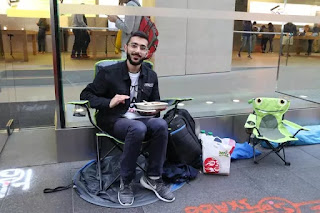 A mad apple fan who can't wait to get his hands on the new iPhone is already queuing up at a store, ten days earlier before the sales of the new smartphones.

The tech firm is expected to unveil three new iPhones tonight, including iPhone 8 and a flagship gadget called the iPhone X Edition.

This gadget probably won't be in stores for at least another week and a half, but that isn't a problem for Mazen Kourouche who is now camping outside an Apple Store in Sydney.


According to reports, he was one of the first people to get their hands on the iPhone 7 last year and hoping to be among the first buyers this year.

Speaking to news com au, he said: “Before I used to do it for the phone, now I am running a tech YouTube channel and trying to get the news out there and cover it first

The 20-year-old is also with two of his friends to ensure they do not lose their position at the front of the line over the coming weeks.
20:21:00
StreetajeboStaff
gist