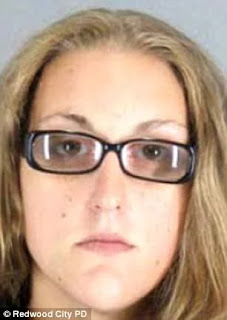 A McDonald's employee, Sarah Lockner, 25, was arrested last week, after she gave birth inside a bathroom at work and tried to flush the newborn baby down the toilet.

Lockner was reportedly working an evening shift at her job at McDonald's  located at Redwood City, California on September 4, when she started complaining of stomach pains.

She complained to her boss who face her permission to leave work early, but rather than go home, Lockner went into bathroom and stayed in there for a long time.


His co-workers noticed that she had spent too much time in the bathroom, grew worried and decided to check on her.

When the two female employees went to check on Lockner, they found her inside a stall, surrounded by a pool of blood.

One of the employees looked over the top of the closed stall and witnessed Lockner give birth to a baby. As soon as she saw Lockner holding a newborn baby to the toilet, she stepped down to get help, but then heard the toilet flush and Lockner asking her not to call police.

She looked back in and saw Lockner try to flush the baby boy down the toilet , with his head first.

The employee rushed to the baby's rescue and took him away from Lockner, who begged her not to share the incident with anyone. The employee immediately left the restroom and called 911.

Paramedics rushed to the scene, and though the baby was not breathing and didn't have a pulse, they were able to resuscitate him.

The baby boy was immediately taken to the Lucile Packard Children’s Hospital and placed in a medical induced coma. Fortunately, he has since been taken off life support and is expected to survive while receiving care, according to prosecutors, though it's unclear if he sustained brain damage from the trauma he experienced earlier.


The county’s private defender program was appointed when she appeared in court Monday, and she did not enter a plea, according to prosecutors.

Her case was adjourned to Sept. 18 for appearance of a designated attorney and entry of plea.

She allegedly told police that neither she nor her boyfriend knew she was pregnant.

She is currently being held on $11million bail. If convicted, she could face a life sentence.

Child Protective Services are currently trying to determine if there's a family member to release the baby to, once he is healthy enough to leave the hospital.