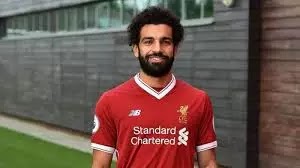 Liverpool’s Mohamed Salah has won the UEFA Champions League Player of the Week, following an impressive display in the 2-2 draw against Sevilla on Wednesday.

The Egyptian winger has been in sensational form since his summer move from Roma.

Salah, who scored a deflected effort, now has four goals in seven appearances.

Jurgen Klopp’s side will welcome Burnley to Anfield and Salah will be looking to continue his impressive run of form.
11:14:00
StreetajeboStaff
gist, sports