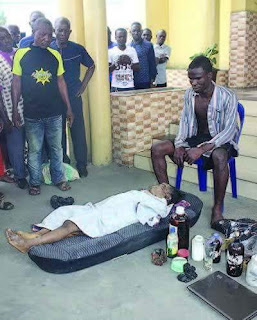 Mrs. Lucy Nmezuwuba, the mother of eight-year-old Chikamso, who was raped and killed by Ifeanyi Dike, wants the suspect crippled to avoid another escape.

The 24-year-old ritual killer suspect,       Dike, an undergraduate of the University of Port Harcourt allegedly raped and killed Chikamso in his house at Messiah Close, Eliozu, Obio/Akpor Local Government Area of Rivers State,  removed her vital body parts and was arrested by local vigilance group while on his way to dispose her body.

He escaped from the custody of the State Criminal Investigation and Intelligence Department, SCIID, and fled to Jos.


The accused was paraded on Monday after his re-arrest on Friday, September 8, by policemen in Barkin Ladi Local Government Area of Plateau State, where he was arrested for another robbery and attempted murder.

The family of the victim have demanded speedy trial and prosecution of Dike to serve as deterrent to other ritual killers.

Mrs. Nmezuwuba, specifically urged the police to cripple Dike to avoid another escape and swift trial, while the father, Dr. Ernest Nmezuwuba, demanded that all those involved in the killing of his daughter be brought to book without delay.

Meanwhile,  the suspect was was arraigned and remanded in prison by a chief magistrate’s court sitting in Port Harcourt, Rivers State.
15:01:00
StreetajeboStaff
gist