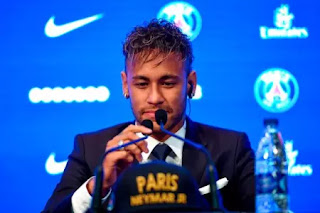 Paris Saint-Germain star forward, Neymar, has insisted he is not obsessed with winning his first Ballon d’Or prize.

The Brazilian, who cost the Ligue 1 giants a princely €222million last month, says teams’ trophies are more important to him.

Neymar’s move away from Barcelona, was considered by many as desire to escape Lionel Messi’s shadow and fight for football’s top individual gongs.


The 25-year-old has taken his tally to five goals and five assists in as many games, after inspiring PSG to a 5-0 thrashing of Celtic on Tuesday.

“Of course a football player wants to win the Ballon d’Or,” he said after the Champions League win in Glasgow.

“This is a great team and, if we keep going like this, we have a big chance of doing it [winning the tournament]. “I’m very happy to start with a win. Of course, it’s not only about getting goals, but that’s the most important.”
08:38:00
StreetajeboStaff
gist