OZIL TO LEAVE ARSENAL NEXT YEAR. 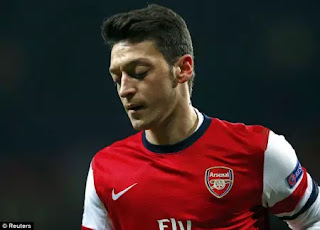 Mesut Ozil is planning to follow Alexis Sanchez out of the exit door at Arsenal, when his contract expires in June.

Sanchez’s inevitable departure has only been delayed, as the Gunners were unable to land Thomas Lemar on transfer deadline day last summer.

But there had been hope that Ozil would commit his future to the Gunners before Christmas.


However, SportBild has now revealed that talks over extending the German playmaker’s deal ceased in February, with Arsenal yet to re-open negotiations.

It has also being reported that Arsenal’s opening offer, was some way below the rumoured £250,000-a-week package previously reported.

Unless Arsene Wenger can convince Ozil to stay, he will be free to sign a pre-contract agreement with foreign clubs from January 1.
09:18:00
StreetajeboStaff
gist