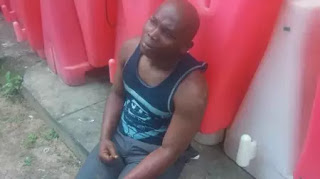 The suspect, 29-year-old Raphael Ndukwu, was also identified as a member of the gang that recently abducted and killed a Reverend Father in Owerri, Imo State.

The victim was nabbed by FSARS operatives after his recent operation where he kidnapped one Gloria Emordi and made away with her Toyota Venza Sports Utility Vehicle (SUV), which is yet to be recovered.

The victim was said to have visited Orlu, her hometown in Imo from Lagos where she resides, when she was kidnapped. According to police sources, the suspect was nabbed after a tip-off from informants, who hinted police that he had fled to Lagos to take refuge after the Imo operation.


The source said: “The suspect is a leader of a notorious armed robbery and kidnapping gang that has been terrorising Imo and its environs. He usually comes to Ojo in Lagos to take refuge after any operation. From our investigation, the suspect is among the gang members that killed the Catholic priest in Owerri, Imo State, Cyriacus Onunkwo.”

Meanwhile, the Lagos State Commissioner of Police, Edgal Imohimi, has said Divisional Intelligence Offices would be set up at police stations across the state to handle information given by members of the public.