Home » gist » POLICE BRUTALITY IN BENIN : AN ONGOING MENACE WITH NO SIGNS OF ENDING.

POLICE BRUTALITY IN BENIN : AN ONGOING MENACE WITH NO SIGNS OF ENDING. 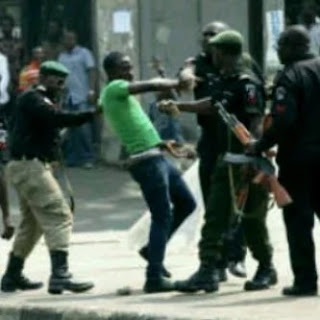 Like many residents in Benin City, three young men drove through the city on a Saturday evening with no intention of breaking the law or disturbing the peace and certainly no inclination that they were about to become victims of the highest level of Police brutality and abuse against civilians.

However, as they made their way back home on Saturday the 9th of September 2017, they made a turn from Airport Road into Boundary Road and suddenly from nowhere, they were suddenly commandeered off the road by a private vehicle (Reg Number: BEN160TN) with four armed men.

Out of fear, the young men parked the car and pondered about their safety and also what their fates would be before the armed men.


As the young men stopped the car, one of them stepped out of the vehicle and asked the armed men what they wanted. He was then informed that they were Police Officers.

The young men (victims) found this hard to believe as there was no identification on the armed men, no uniforms or even a vehicle with Police markings on sight.

As a result, the first victim (Victim 1) who came down asked the armed men how they could be identified as Police officers

Upon making this request, the Police officer closest to the first victim stated that he was stupid for asking such a question.

In response, Victim 1 stated he was not stupid. The second armed police man asked the victim 1 why he was abusing the police officer and before he could respond, the first officer slapped the victim with the second officer following up with a punch in quick succession.

In the midst of the chaos, the driver of the victims vehicle was also brutalised in the process.

The Third officer then approached the scene and pled with his colleagues to stop brutalising the victims.


After creating a scene on the roadside with several drivers and pedestrians stopping to see what was going on, the four armed men entered their private vehicle and fled the scene.

Following the incident, the first victim was rushed to a private hospital for treatment and subsequently to the Nigerian Police Force Hospital as requested by the Police for proper documentation.

This incident has now been reported at both the Airport Road Police Station in Benin City and an informal complaint at the State Criminal Investigation Department (CID) also in Benin.

As at the time of reporting the case at the police station, it was discovered that the four armed men were Police officers from Airport Road Police Station in Benin.
09:23:00
StreetajeboStaff
gist