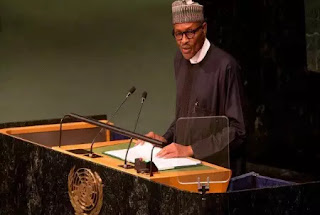 Special Adviser to President Muhammadu Buhari on Media and Publicity, Femi Adesina, has claimed that Nigerians are pleased with his principal’s address at the United Nations General Assembly in New York on Tuesday.

In a Skype interview with Seun Okinbaloye on Politics Today, when asked what the general reaction to the speech was and how the outing benefits the country, he replied: “It has been very upbeat.

Most Nigerians, all most all, that I have spoken to here are quite happy. They were very pleased with the speech the President gave and I think it is a good time to be a Nigerian.


“For the other part of your question: apart from the speech to the General Assembly, the President has also held a bilateral meeting with the King of Jordan.

Jordan has assisted Nigeria in the fight against insurgency. I think they gave close to 200 armoured tanks to Nigeria at very liberal rates. So, a bilateral meeting (was) held to move that relationship forward.”


“You can then imagine that there would be a lot of chit chat over lunch on issues that pertain to Africa because all the presidents there with the American President are going to be African presidents,” he added.
09:14:00
StreetajeboStaff
gist