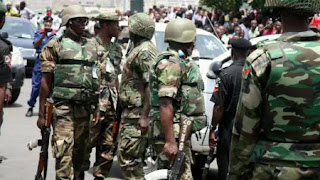 Some governors from the south-east have set up a committee to investigate the recent crisis between soldiers of the Nigerian military and members of the Indigenous People of Biafra (IPOB) in Afara Ukwu, Umuahia, Abia state capital city.

The governors under the aegis of the South-East Governors' Forum said the committee is saddled with the responsibility of recommending lasting solution to end such crisis should it occur in future.

The newly established 7-man committee is also expected to submit its report during the forum's meeting on Friday, September 15.


Speaking on the task, the director of media and communications of the forum, Michael Udah, in a statement said reports that the forum condemned the attack on the IPOB by the military is false and should be disregarded.

Udah said: “Reports in the social media that the governors condemned the alleged attack on IPOB members are false, but instead, they are working assiduously to bring lasting peace and stability to the zone.

“I did not tell any medium on the social and print media that the governors condemned the incident as they would soon meet to review the situation."
14:28:00
StreetajeboStaff
gist