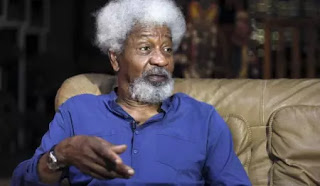 Nobel Laureate, Professor Wole Soyinka, on Wednesday warned President Muhammadu Buhari and the Nigerian Army to be cautious in its activities, following the declaration of Operations Python Dance and Crocodile Smile in some parts of the country.

Soyinka made the call during his address at a press conference marking the 50th anniversary of the death of a poet, Christopher Okigbo, at the University of Ibadan.

Soyinka urged the Federal Government and the military authorities to tread with caution while dealing with civilians.

“There has to be a way out of a repeat of war. But we are reaching a stage whereby, like Christopher Okigbo, people are putting their lives on the line again, which can lead to terrible consequences.

“I think at a time when cattle rearers, who feel they own the nation, humiliate and dehumanise innocent citizens in their communities, this is an area the military can focus more on,” he said.