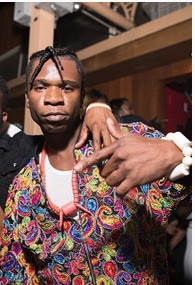 Popular Instagram and Twitter favorite Speed Darlington has revealed in a new video that he wants to rule the world with his newly acquired smartphone.

The Bandadadang crooner, Speeddarlington who recently made his first $135 in 7 years in music has used up all the money (well not all as $5 is remaining) to buy a new phone!

The controversial US based Nigerian singer ditched his $84 dollar phone "He was using to do great things" and bought a new one and according to him, he will rule the planet with it!


Sharing the video, he wrote:

BangDadaDang! I just bought a new phone with 13MP autofocus main/rear camera. It's not iPhone but who cares? iPhone only has 12MP camera.

I became Bang Master with a $84 phone. I'm about to rule the world with this phone. Hello my subjects!

watch the video of speed darlington below