Home » gist » TO SHOOT DOWN OR NOT? NORTH KOREA LAUNCH HIGHLIGHTS INTERCEPT ISSUES.

TO SHOOT DOWN OR NOT? NORTH KOREA LAUNCH HIGHLIGHTS INTERCEPT ISSUES. 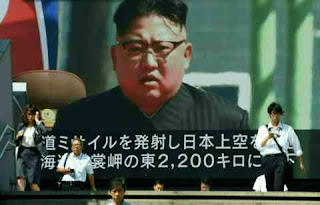 North Korea's latest missile launch over Japan set sirens blaring and triggered alerts telling people to seek shelter -- yet neither Tokyo nor Washington tried to shoot the rocket down.

The test follows one in August that saw another rocket soar over Hokkaido. In that case too, much-vaunted Japanese and US missile-intercept capabilities were not used.

Now some in the United States are wondering why all this sophisticated weaponry isn't being used, especially as North Korean leader Kim Jong-Un accelerates toward his goal of building a nuclear missile capable of striking the United States.


"The next time the North Koreans launch a rocket, especially one that will traverse over our ally Japan, I would hope that we shoot it down as a message to the North Koreans and to other people, like in Japan, who are counting on us," Republican Congressman Dana Rohrabacher told lawmakers this week.

"Unless we demonstrate we're willing to use force, there's no reason for them to believe we will."

The US Pacific Command confirmed Friday's rocket was an intermediate-range ballistic missile (IRBM), and Seoul's defense ministry said it probably traveled around 3,700 kilometers (2,300 miles), hurtling to a maximum altitude of 770 kilometers.

The missile, which fell in the Pacific Ocean, represented North Korea's furthest-ever flight.

Evans Revere and Jonathan Pollack of the Brookings Institution wrote in a paper that Washington should declare that any future North Korean missiles toward or over US or allied territory would be deemed a direct threat that would "be addressed with the full range of US and allied defensive capabilities."

The United States and Japan together claim they can shoot incoming missiles, but officials say Friday's siren-sounding launch didn't meet that threshold.


If the US and its allies "would have determined that it was a direct threat, we would have shot it down," said Pentagon spokesman Colonel Rob Manning, noting the military's "deep arsenal of capabilities."

For Japan, these include advanced Patriot batteries, which can stop lower altitude missiles, and SM-3 missiles it is developing with the US that can take out high-flying short- to intermediate-range ballistic missiles.


The technology is imperfect but the Pentagon has demonstrated it can hit ICBM and intermediate-range missile targets AFP.

Japan and the United States do not want to risk trying an intercept unless it is posing a certain threat. A failed attempt could cause wide alarm and tip off Kim about any limitations.

"A potential failure in intercepting a missile could only result in giving an unnecessary impression that Japan's capability of missile defense is insufficient," Kato said.

Japan also has a network of Aegis missile-defense destroyers, and President Donald Trump wants Tokyo and South Korea to increase buys of such US gear. In Japan's case, that could include the purchase of a land-based version of Aegis.