Home » gist » TRUMP WARNS - US MILITARY STRIKE ON NORTH KOREA WOULD BE "A VERY SAD DAY".

TRUMP WARNS - US MILITARY STRIKE ON NORTH KOREA WOULD BE "A VERY SAD DAY". 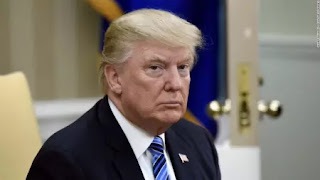 President Donald Trump of the United States of America has warned that an American military strike on North Korea is not inevitable, but it would be “a very sad day” for the Asian nation if it ever came to pass.

Speaking at a White House news conference after meeting the leader of Kuwait on Thursday, Trump said Pyongyang ‘is behaving badly and it’s got to stop’ as US officials eye policy of nuclear containment.


Trump’s comments are coming a day after the United States was forced to ask the UN Security Council to freeze the assets of North Korea’s leader Kim Jong-un.

The move by the US also seeks to slap an oil embargo and textile exports ban on the pariah Asian country in response to Pyongyang’s sixth and most powerful nuclear test.

However, Trump, like his predecessors, may find neither negotiations nor economic and military pressure can force North Korea to abandon its nuclear programme, and the United States has no choice but to try to contain it and deter Pyongyang from ever using a nuclear weapon.
16:32:00
StreetajeboStaff
gist