TWITTER APPOINTS A NIGERIAN, BOLUWATIFE AIKI-RAJI AS A SOFTWARE ENGINEER 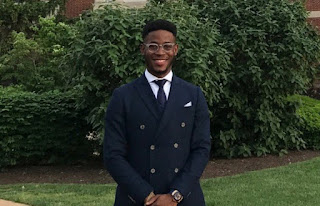 Another young Nigerian Boluwatife Aiki-Raji has just gotten his dream job with Twitter.

The young man, who was born in Nigeria but studied at Howard University, has been offered a full-time position from Twitter as their Software Engineer.


Naijalaoaded gathered that, Raji who graduated from Olashore International School in Nigeria, attended a technical school for a year before his studying Computer Science at Howard University.

Describing his stay at Howard University the young man disclosed that: –

“I met two wonderful people at Howard who are now my roommates, Errol Grannum and Barry Harris, they along with his mentor, Emmanuel Ademuwagun and their interest in computer science spurred the change of my major.”

HBCUBuzz.com also reported that while Raji was at Howard, he was exposed to various career opportunities that any student would not think twice before jumping at the offer.

He served as a Google EDGE particiP@nt in his freshman year and continued to move full speed ahead.


In his freshman year at Howard, Raji had a friend at Twitter office who made him sell himself to the company and in no time he went through a rigorous interview process with the CEO Jack Dorsey and he got the job soon after.

Raji said: “Twitter is a wonderful company and I have met amazing people there. I love my team at Twitter and I feel right at home with them.

I know the position at Twitter will give me an opportunity to help other computer science majors like myself sometime down the line. I am also happy because I believe I have made my parents proud.”
21:36:00
street ajebo
gist