U.N. PROVIDES CUBA WITH FOOD AND AID AFTER HURRICANE IRMA RIPS UP COAST. 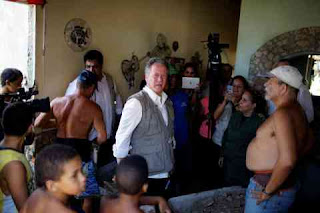 HAVANA (Reuters) - The United Nations' World Food Programme said on Saturday it was launching a $5.7 million operation in Cuba to help feed nearly 700,000 people in areas most affected by Hurricane Irma.

The monster storm ripped last weekend along the length of the northern coastline of the Caribbean's largest island, tearing off roofs, wrecking the power grid and damaging crops.


"This hurricane just went down the entire coastline, the volume of impact is just unprecedented," WFP Executive Director David Beasley said during a visit to Havana, after meeting with Cuban Vice President Miguel Diaz-Canel.

The WFP already had more than 1,600 tonnes of food pre-positioned around Cuba available to distribute and had funds to buy more. It would start by distributing for free rations of rice and beans in the most vulnerable areas.

Irma's impact on food availability in the a nation of 11 million inhabitants may be both short and medium-term, Beasley said.

"We are talking about 60,000 hectares of agricultural land that have been dramatically impacted, banana trees, citrus, rice maize, everything," Beasley said.

We are talking about 60,000 hectares of agricultural land that have been dramatically impacted, banana trees, citrus, rice maize, everything," Beasley said.

Cuba would need to assess the soil's salinity to ascertain how that would affect the next planting season, he said.


In the light of climate change, Irma could be a "sign off more things to come", Beasley warned.

"Fifty to forty years ago, the hurricanes were less frequent, and less severe," he said, adding that WFP was working with the Cuban leadership to prepare for such change.

At the height of its strength, Irma ranked as one of the most powerful Atlantic storms in a century and was the first Category 5 hurricane to make landfall in Cuba since 1932.

"It's times like this when we all lay aside our political differences and come together for the common good," said Beasley, former governor of South Carolina in the United States, Cuba's old Cold War foe.
09:29:00
StreetajeboStaff
gist