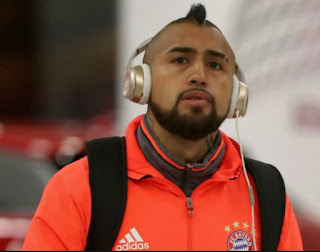 Bayern Munich midfielder Arturo Vidal has retired from international duty at the age of 30 after Chile failed to qualify for the 2018 World Cup.

Vidal said his decision comes with his “soul crushed” after he missed Chile’s final shot at qualification on Tuesday through suspension, the South American champions losing 3-0 to Brazil to miss out on the tournament in Russia next year on goal difference.


The former Juventus player, who along with Arsenal’s Alexis Sanchez was part of the golden generation of Chile players that claimed the Copa America in 2015 and 2016.

“Thank you lads, for everything, for all these years together… for teaching me and for showing a country that with effort and work anything is possible in life,” the Vidal wrote in Spanish on Twitter.

Chile, who were beaten by Brazil in the round of 16 at both the 2010 and 2014 World Cups, were soundly beaten again by Brazil in Sao Paulo on Tuesday.


The Chileans finished level on points with Peru, who secured a two-legged playoff against New Zealand, but trailed on goal difference to be placed out of the running in sixth in the final South American qualifying table.