LIONEL MESSI HAS BEEN RULED OUT OF NIGERIA FRIENDLY MATCH ON NOV. 23, 2017 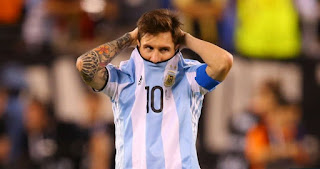 Nigerians hoping to see Argentina magical forward, Messi participate in the next friendly match with the Super Eagles might be disappointed with the latest development.

Argentina captain Lionel Messi will not play against the Super Eagles when both sides clash in an international friendly on November 14.


However, Messi will play the friendly against Russia on November 11 at the reopening of the Luzhnikí stadium in Moscow.

Argentina coaching crew, headed by Jorge Sampaoli, will allow the striker fly out of Moscow after the first friendly, to get enough time to rest before returning to club duties.

The rest of the Argentina squad will head to Krasnodar, where they will play against Nigeria on November 14.


This same scenario happened in the Albiceleste’s last international friendlies against Brazil (June 9) and Singapore (June 13), when Messi went the distance against the Seleção but was omitted from the matchday squad against the Asians.

Meanwhile, Sampaoli has called up Emiliano Insúa to replace Lucas Biglia, who suffered from an inflammation in the patellar tendon of his left knee
20:44:00
street ajebo
gist, sports