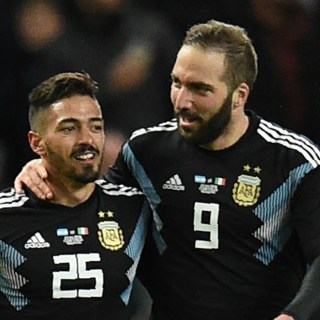 Download video of Argentina vs Italy 2-0 International Friendly win on March 23, 2018 goals and highlights below.

Lionel Messi was reduced to the role of spectator as Argentina beat Italy 2-0 at the Etihad Stadium
Ever Banega and Manuel Lanzini ensured Lionel Messi’s absence was not keenly felt as they hit the target in Argentina’s 2-0 friendly win over Italy.

Messi, who has been struggling with a muscle problem, was not included and reduced to the role of spectator as Argentina dominated much of the encounter at the Etihad Stadium.


Italy’s returning goalkeeper Gianluigi Buffon, who reversed his decision to retire from international football following the Azzurri’s failure to qualify for the World Cup, was kept busy throughout as he won his 176th cap.

Yet Luigi Di Biagio’s men, who paid tribute to late former Fiorentina captain and Italy international Davide Astori by emerging wearing number 13 shirts bearing his name, could have taken the lead themselves if not for a glaring miss by Lorenzo Insigne.

And his profligacy was punished in the 75th minute as Banega played a neat one-two with Giovani Lo Celso and fired beyond a stranded Buffon.

Italy could not muster a response and Lanzini put the game beyond doubt five minutes from time. Di Biagio – part of a three-man shortlist to take over as permanent Italy boss – will hope for a better audition against England on Tuesday, when Argentina face Spain as they continue to build towards the World Cup.

Despite Messi’s absence Argentina showed the greater attacking initiative of the two sides, with Angel Di Maria testing Buffon in the fifth minute.

A sterner examination of the 40-year-old’s reflexes came when he was forced to get down to his right to keep out Nicolas Otamendi’s header from a Di Maria corner.

Leandro Paredes whistled a swerving long-range effort just past Buffon’s right-hand post and the veteran shot-stopper was required to preserve parity with two saves in as many minutes just before half-time.

First Nicolas Tagliafico stung his palms and then Buffon thwarted Juventus team-mate Gonzalo Higuain after he was played through by Di Maria.

For all Argentina’s chances they should have fallen behind three minutes into the second half when debutant Federico Chiesa pounced on a woeful backpass from Paredes, only for Insigne to somehow fire wide from his centre with only Willy Caballero to beat.


Higuain headed over from an excellent Di Maria cross from the left as Argentina responded to that scare, but they were grateful to Caballero for preventing Ciro Immobile from putting Italy ahead after latching onto a wonderful lofted pass from Marco Verratti, who later came off having appeared to suffer a knock.

Caballero, winning his first international cap at the age of 36, was required again to beat away an Insigne effort at the near post, the flag having stayed down despite the Napoli forward appearing to have strayed offside.

Diego Perotti lashed over at the other end but his fellow substitute Banega ended Argentina’s frustration by combining excellently with Lo Celso and finding the net with a low effort.

Perotti was then denied by Buffon at the near post but there was nothing the veteran could do to stop Lanzini doubling the lead, the West Ham forward curling in a magnificent effort from just inside the area after Higuain had broken free on the counter.

Download video of Argentina vs Italy 2-0 International Friendly win on March 23, 2018 goals and highlights below.