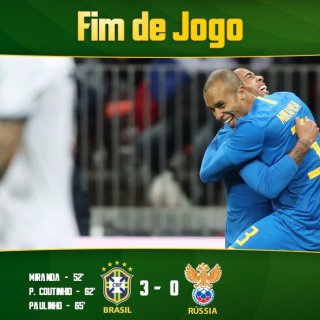 Download video of Brazil VS Russia 3-0 on 23 March, 2018 in a 2018 world cup international friendly match goals and highlights below

Brazil were without Neymar for an international friendly at the Luzhniki Stadium but Miranda, Philippe Coutinho and Paulinho earned a win.


Barcelona stars Philippe Coutinho and Paulinho were on the scoresheet as Brazil cruised past Russia 3-0 in an international friendly on Friday.

Tite’s side were without Neymar, the Paris Saint-Germain forward recovering from a fractured foot, but they eased to victory against the World Cup hosts in Moscow.

Igor Akinfeev made a string of fine saves to keep Russia level in the first half but the goalkeeper was at fault for Brazil’s opener, failing to divert a Thiago Silva header out of the danger zone, with Miranda on hand to turn home the rebound.

Within nine minutes Brazil had doubled their lead from the penalty spot, Aleksandr Golovin clumsily fouling Paulinho in the box, his club team-mate Coutinho stepping up to score.

Paulinho added his name to the scoresheet as Brazil moved through the gears, Willian hanging up the perfect cross for the midfielder to nod in at the back post.


A burst of three goals in 13 minutes left the result in no doubt, but substitute Alan Dzagoev went close to grabbing a consolation for Russia, sending a drive narrowly wide.

Brazil created their first clear chance in the fifth minute, a lofted Dani Alves pass sending Gabriel Jesus into the box, but the striker slipped as he shot and Akinfeev saved.

Jesus – who survived an injury scare after taking a knock to his ankle – then headed a Coutinho cross straight at Akinfeev.

Coutinho’s speculative long-range strike was plucked out of the air by Akinfeev as Brazil continued to probe without incision, Willian also failing to test the Russia goalkeeper.

Russia’s first chance arrived in the 32nd minute, Alisson tipping Aleksandr Samedov’s drive over the crossbar after Alves lost possession on the halfway line, allowing the hosts to break.

Paulinho should have given Brazil the lead shortly after the restart, but Akinfeev saved with his legs after Willian teed the Barca midfielder up in the box.

Moments after making a stunning block with his face after Samedov deflected a shot directly at him, Akinfeev’s mistake handed Brazil their opener in the 53rd minute.

The goalkeeper could only parry a Silva header directly to Miranda, who slammed the loose ball into the roof of the net.

And when Paulinho was bundled over in the box by Golovin, Brazil made sure of their win.

Download video of Brazil VS Russia 3-0 on 23 March, 2018 in a 2018 world cup international friendly match goals and highlights below