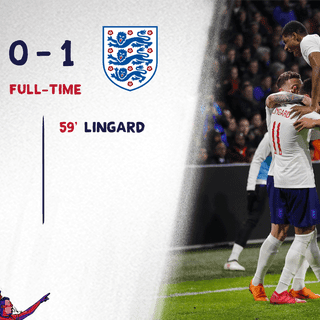 Download video of England vs Netherlands 1-0 in an international friendly match goals and highlights below.

Lingard’s first-time strike from the edge of the box in the 59th minute secured England a morale-boosting result as they stepped up their World Cup preparations.


After back-to-back 0-0 draws with heavyweights Brazil and Germany last November, Gareth Southgate’s side turned in a promising performance despite the absence of star striker Harry Kane through injury.

A fourth successive clean sheet, secured with Kyle Walker playing in a back three, showed England have solid foundations to build on, while they looked bright and bubbly in possession.

In contrast, Koeman will now fully appreciate the size of the task he faces with the Oranje, who saw their five-match winning streak end with a whimper on home turf.

Jordan Pickford enjoyed a comfortable outing in goal as England eased to their first triumph over their opponents since a famous 4-1 thrashing at Wembley during Euro 96.

Download video of England vs Netherlands 1-0 in an international friendly match goals and highlights below.