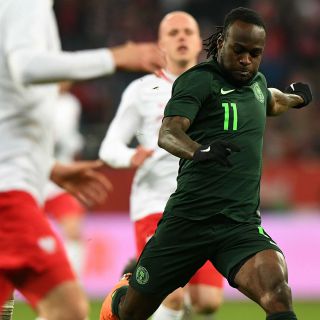 Download video of Nigeria vs Poland 1-0 in a world cup international friendly match on March 23, 2018 goals and highlights below

Nigeria continued with their impressive 2018 World Cup preparations by defeating Poland 1-0 at the Municipal Stadium, Wroclaw on Friday evening.

Victor Moses’ 61st-minute penalty capped off a resilient performance for the Super Eagles over their enterprising hosts, with the advances of Robert Lewandowski and his teammates curtailed for the entire duration of the game.

Gernot Rohr’s choice between the sticks against the Europeans generated the most attention prior to the encounter and the German tactician settled it by handing youngster Francis Uzoho his full debut.

Joel Obi, in the absence of John Obi Mikel partnered Wilfried Ndidi at the heart of midfield while Brian Idowu got the nod ahead of Elderson Echiejile at left-back.


Nigeria dominated the early exchanges but were less adventurous in the final third. But in the eighth minute, the woodwork denied the hosts a lead after Lewandowski connected to a teasing Rafal Kurzawa low cross.

The game soon took on a physical approach, with the Poles looking too physical for their Africans, but it was Adam Nawalka who felt the pressure the most after midfielder Karol Linetty went off injured and was replaced by Jacek Goralski in the 17th minute.

Rohr’s men tried their bit to threaten their hosts after Moses picked himself up to curl a free kick which failed to threaten Lukasz Fabianski in the 34th minute.

The game sparked to life in the closing stages of the first half, with Poland threatening with a myriad of set pieces.

Kurzawa’s curling free-kick evaded the head of Grzegorz Krychowiak and minutes later, the West Bromwich Albion midfielder thought he had opened the scoring but referee Michael Oliver was convinced by Troost-Ekong’s goal-line clearance. Uzoho also parried Lewandowski’s low freekick, which was the last chance before the break.

Uzoho overcame his jittery start to the encounter and got down well to deny Lewandowski another chance as the Bayern Munich man cut a frustrated figure.

In the 61st minute, the Super Eagles took the lead thanks to Moses‘ penalty after he was upended by Marcin Kaminski. The Chelsea man rolled his kick past substitute goalkeeper Bartosz Blalkowski.

Lewandowski’s evening was brought to a halt six minutes after the hour mark, with Jakub Swierczok replacing the Polish all-time leading scorer.

Napoli hotshot Arkadiusz Milik was introduced to pile more pressure on the resilient Eagles defence but Rohr’s men held on for a remarkable victory.

Nigeria will hope to continue with their positive World Cup preparations when they face Serbia at the Hive Stadium on March 27.


Download video of Nigeria vs Poland 1-0 in a world cup international friendly match on March 23, 2018 goals and highlights below