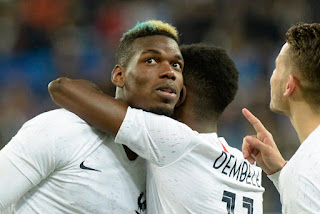 Paul Pogba answered his critics by serving as the driving force for France with a goal and an assist in a 3-1 friendly win away to World Cup hosts Russia in St Petersburg, while Kylian Mbappe also impressed by netting twice.


Having been introduced as a second-half substitute in the 3-2 loss to Colombia in Paris last week, Pogba started at Krestovsky Stadium and came to exert a telling influence on proceedings, setting up the opening goal for Mbappe in the 40th minute, before netting a stunning free-kick four minutes into the second half.

The commanding performance was a welcome tonic for the 25-year-old midfielder, who has endured a baffling period in and out of the Manchester United first team in 2018, having seemingly fallen somewhat from manager Jose Mourinho’s favour despite his evident talents and weighty price tag.

France allowed Russia captain Fedor Smolov to get a goal back from a swift counterattack with 22 minutes remaining, before the visitors made the game the safe with Mbappe’s second goal in the 83rd minute.

But the Paris Saint-Germain star injured himself in the process of completing his brace and had to be replaced by Thomas Lemar, providing a potential fitness worry for club and particularly country ahead of the World Cup.

Les Bleus’ campaign begins against Group C opponents Australia in Kazan on June 16, followed by meetings with Peru and then Denmark.