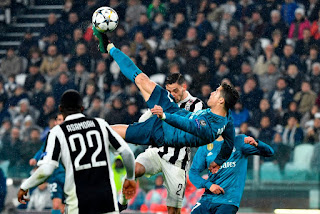 Two goals from Cristiano Ronaldo, the second a moment of pure quality, helped Real Madrid to a commanding 3-0 win over Juventus in the first leg of their Champions League quarter-final.

The Portugal star became the first player in the competition’s history to score in 10 consecutive appearances, a run that began when Madrid beat Juve 4-1 in last season’s final, before setting up Marcelo to add what could be a crucial third for the reigning champions.

Paulo Dybala was sent off for the hosts in the second half to compound a miserable outing as they suffered their first loss in all competitions since November, and a first at home to Madrid in Europe since 1962.

Ronaldo buried a cross from Isco – who was picked ahead of Gareth Bale by head coach Zinedine Zidane – within three minutes, but Juve were probably the better of the teams in an open first half.

Massimiliano Allegri’s side continued to press after the break but Ronaldo struck again in the 64th minute, sending an overhead kick past the motionless Gianluigi Buffon to earn a standing ovation from the home fans.

Dybala received a second yellow card just two minutes later and Marcelo finished a slick move to make it an emphatic win for Madrid, who surely have one foot in the semi-finals despite Ronaldo missing a hat-trick chance in stoppage time